August 29, 2021 – Truma takes a step forward, and expands from heating and air conditioning systems to control systems. If until now it was possible to manage its products through CP Plus commands and the iNet system, the arrival of the iNet X allows you to use a single panel for many of the devices installed on the recreational vehicle, including those from other manufacturers. All this adding a “smart” touch that allows better management of the vehicle and the journey.

The system is based on a digital control panel (with 4.5-inch color touch screen available in two versions: one for new production vehicles and one for aftermarket installation) and a smartphone app. The iNet X Pro model is what you will find already installed on motorhomes and vans and its range of functions varies depending on the vehicle equipment.

The basic version now allows the control, also via Bluetooth (therefore when you are near the vehicle), of the Combi, Saphir and Aventa heating and air conditioning systems and those of other manufacturers, such as Dometic Freshjet and Alde Compact 3020HE. Thanks to the internal and external temperature sensors it is possible to set the air conditioning of the vehicle to work automatically.

The connection of the level sensors (for example those relating to the battery and water reserves) and the switches (main, pump, multimedia, light, etc.) allows the Truma iNet X Pro panel to be used as the main control module of the whole vehicle. Among other things, the system displays the forecast of residual energy autonomy and, starting from next spring, it can also be connected to the Level Control system to keep an eye on the gas reserve. Finally, Truma said goodbye to the obsolete problem reporting system based on incomprehensible codes, and now in case of difficulty the exact denomination of the errors is displayed.

According to the company, the iNet X Pro system will remain upgradeable in the future to increase the available functions, although obviously it is impossible to say how long. Many vehicle manufacturers are already convinced by the solution. During this year the iNet X Pro system will be installed on some models of the Knaus group on Weinsberg vehicles, by Trigano on Roller Team Zefiro, CI Magis and Benimar, as well as by Carthago on Malibu.

Those who already own a recreational vehicle will be able to update it starting from next spring with the Truma iNet X panel, which can also be used instead of the CP Plus. Compared to the Pro version there will be no possibility of installing it as main control unit and the Alde Compact 3020HE is not currently among the compatible devices. Like the Pro version, this too will still be upgradeable and therefore it is not excluded that the controllable devices will increase over time. The price has not yet been disclosed. 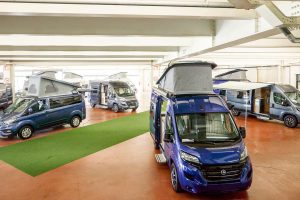